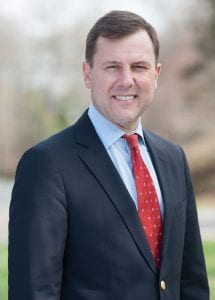 Tom’s allegiance to public service has been inspired by the proud heritage of the Kean family. The grandson of former U.S. Representative Robert Kean and son of former Governor Thomas H. Kean, Sr., Tom is continuing a legacy of dedicated public service to New Jersey. From a young age, Tom understood and recognized the importance of civic engagement. As a student and young adult, he volunteered at a camp for diabetic children and also taught Sunday school at his church.

While studying history at Dartmouth College, Tom was motivated to broaden his understanding of the world and the international political economy. Dartmouth’s Exchange Program granted the opportunity to transform classroom learning into practical experience. In 1988, Tom traveled to Budapest, Hungary, and the Soviet Union for four months. Through his expedition of Eastern Europe, he received an extraordinary firsthand perspective of the repercussions of government operating insufficiently by attempting to command and dictate the economy. Months after returning to the United States, the Berlin Wall was torn down.

Tom embarked on his career in public service after graduating from university, when he received an appointment from President George H.W. Bush to work in the Environmental Protection Agency, where he met his wife, Rhonda. Following the Bush administration, he had the opportunity to serve in Congressman Bob Franks’ office in Washington, DC. His core responsibility was to advise the congressman on commerce, energy resources, environmental and foreign affairs issues. In addition to his professional duties in Washington, DC, he was a vice president of a fire department where he volunteered as a firefighter and an emergency medical technician.

Following his time in America’s capital, he attended the Fletcher School of Law and Diplomacy at Tufts University. There, he received a master’s degree in law and diplomacy, and was also employed as a graduate school instructor. Tom completed his doctoral studies ABD at Fletcher.

Tom, determined to answer the call to public service again, believed he, personally, could turn ideas into action and make a lasting difference on people’s lives. In 2001, Tom was elected to the New Jersey General Assembly, where he quickly developed a reputation as a leader in ethics reform. Two years later, Tom was named to the upper house of the state legislature.

Tom was nominated and selected for the inaugural class of the Rodel Fellowship program by The Aspen Institute, where he finished a fellowship program for young public officials focused on ethics and responsibilities of public leadership. In 2002, Tom was named one of only 40 state leaders from the entire nation to be recognized as a Toll Fellow by the Council of State Governments for high achievement and service to state government.

Then in 2008, his peers unanimously elected him Senate Republican Leader. Shortly thereafter, he unveiled his caucus’ job creation package, “Common-Sense Plan for a More Affordable New Jersey,” which ultimately reversed the course that previous administrations were quickly leading the state down. The package brings New Jersey back to the basics and is based on the following four pillars:

Spending that reflects your priorities;
Better ways to govern;
Long-term strategies for an affordable state;
Growing our way to a better future

Additionally, Tom is an Honorary Member of the Board of Trustees of the Paper Mill Playhouse and the New Jersey Festival Orchestra.

Tom, Rhonda and their two daughters reside in Westfield.