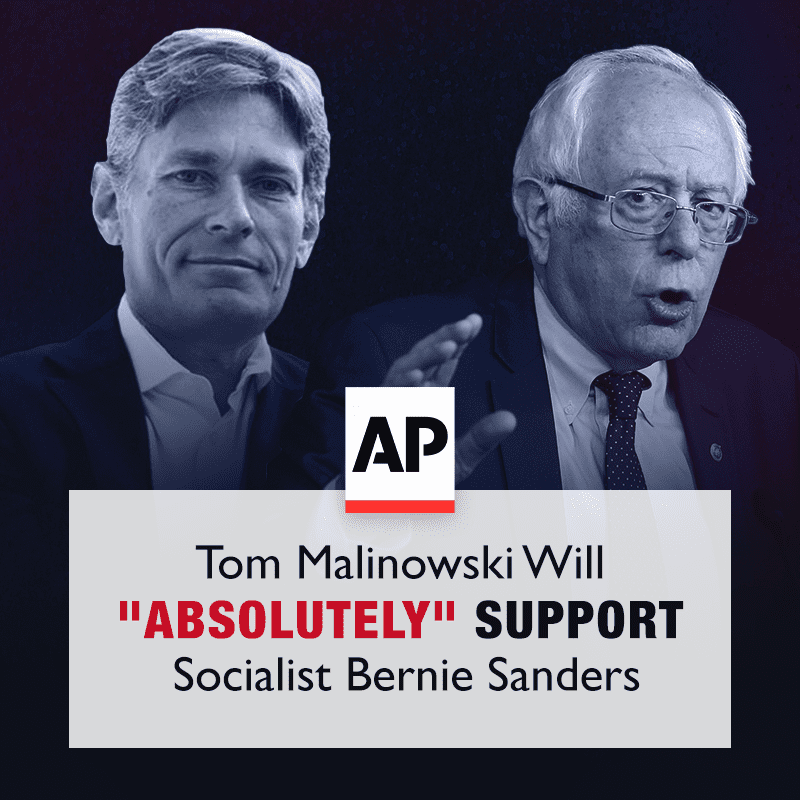 Westfield, NJ – Congressman Tom Malinowski recently revealed that he will “absolutely” support Bernie Sanders if he is the Democratic Presidential nominee.

“Congressman Malinowski has been trying to fool New Jersey voters into believing he is a moderate from the moment he moved into NJ-7 to run for office,” said Kean for Congress Campaign Manager Theresa Winegar.

Malinowski stops by his district and talks about bipartisanship, and even tries to claim that he is a capitalist, but he votes with Nancy Pelosi 100% of the time and now has affirmed he would support a self-proclaimed socialist for President.

Now the voters of NJ-07 know the truth – Tom Malinowski would ABSOLUTELY support Bernie Sanders and his plan for socialized healthcare.

Winegar added, “Now the people of North Jersey know how far left Tom Malinowski truly is. Their representative would back a candidate whose entire platform is built around a $40 trillion, socialized healthcare plan that would kill jobs, raise taxes on the middle class and take away people’s health insurance.”

“Tom Kean’s constituents know that he understands the importance of fixing our broken healthcare system and he has a record to prove it,” said Winegar. “He has worked to lower the cost of prescription drugs, improve access to behavioral healthcare and fought to improve coverage for new moms. As our Congressman, we can count on him to find bipartisan, smart solutions to move our healthcare system forward.”